In the world of materials handling equipment, it’s nice to have the distinction of being the first. That is Clark’s claim to fame. Back in 1917, the Colfor Tool Company in Buchanan, Michigan, which became the CLARK Equipment Company, responded to a need to move materials between its various axle, drill and wheel departments. The employees conceived the first “Tructractor” and the prototype of today’s forklift was born. The Tructractor was the world’s first internal combustion-powered industrial truck. In 1918, eight Tructractors were built and in 1919 over 75 were manufactured. Around the same time, the Yale Lock Company was developing a similar product, but Clark was first on the scene. Incidentally, in 1997 the one-millionth CLARK truck was produced. This model CDP25H Megastat is now on permanent display in Clark Material Handling Company’s showroom in Lexington, Kentucky.

But even better than being the first is still being around today, and being considered the BEST. Clark forklift dealers know this fact all too well. Clark may be blowing its own horn, but it is hard to deny that it has not only kept pace with industry trends since it created the first lift truck, but it has led the pack through research, development and innovation during its almost 90 years in the materials handling business.

The Clark Materials Handling Company has adopted the slogan “Built to Last.” The company produces one of the world’s best forklifts by implementing the latest production techniques, coupled with the ideas and efforts of its highly skilled engineers. To maintain the highest level of quality, Clark has adopted a centralized quality control system which oversees the production from the initial development to the assembly stage.

For the past nine decades, CLARK has been one of the industry’s most progressive and responsive manufacturers, continuously seeking innovative ways to improve product, expand service and provide value to its customers.

Today, Clark is a part of a multi-product international company called The Young An Group, which has an annual sales volume of over 1.5 billion US Dollars. The forklift section’s turnover in recent years fluctuates around 250 million US Dollars annually. For the customer looking for a quality materials-handling product, CLARK has history, volume and sales on its side.

Worldwide, CLARK has one of the broadest product lines in the industry with five major lines: Trucks ranging from 1,500 to 18,000 pound capacities, LPG, gasoline, dual fuel, diesel, narrow-aisle stackers, electric riders and powered hand trucks. Presently, there are over 250,000 CLARK lift trucks operating in North America and 350,000 units operating worldwide.

CLARK was the first forklift manufacturer in the world to be certified in compliance with the internationally accepted quality standard ISO 9001 for all its forklift manufacturing plants worldwide. CLARK’s on-going commitment is to have the Number 1 Quality system in the industry. CLARK’S Korean facility acquired its ISO 14001 (Environmental Management System) certificate in 2001. 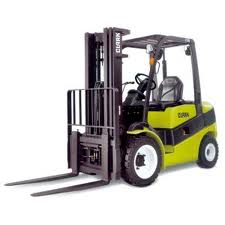 Clark Material Handling Asia was created when Clark Material Handling Company took over the forklift division of Samsung Heavy Industries in 1998. In their Changwon, Korea facility they design, manufacture, distribute and support 1.5 – 7.5 ton IC forklifts and 1.0 – 3 ton counterbalanced and reach machines. The facility employs over 460 people. The Seoul office houses domestic and export sales along with the Finance Department. A complete engineering test facility is also located here, which allows performance testing for the next generation Clark products. The plant utilizes “Just in Time” and KANBAN, for lean inventory, which lends itself to a much cleaner, uncluttered and efficient work environment.

In 1999 Clark opened their 180,000 sq. ft. state-of-the-art parts Distribution Center in Louisville, KY. Design, operational parameters, and personnel were combined to create a world class parts distribution facility which is centrally located to serve all of Clark’s North American dealers and customers. The facility is directly managed by Clark employees, resulting in cost savings and performance improvement.

The Clark PartsPro System is the material handling system’s leading electronic parts and service documentation system. It provides Clark dealers and customers with an efficient and accurate method of identifying parts for every Clark forklift built since 1961. PartsPro ensures the availability of the most current technical information and has the unique capability of creating parts manuals specific to a mixed Clark fleet, making it simple to positively identify and order from a local Clark dealer. The Clark parts motto is: “The right Clark part – the First Time, Every Time!”

As the first Materials Handling Company, CLARK has earned its place in the front of the class. Its commitment to research and development and its investment in technology has ensured not only its survival for almost a century, but guarantees its consistent sustainability and leadership as a charter member of the industry.